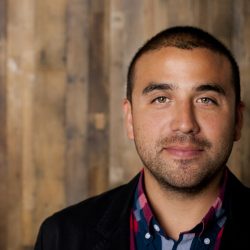 Dave Lomas is the founding pastor of Reality San Francisco. He tells us how he gets started by reading and more reading, how his best ideas come by verbally processing his thoughts with others, and how he’s learned to preach by listening to others who do it well.

Dave was born and raised in the bustling metropolis of Bakersfield, Ca. He began following Jesus as a Junior in HS, started ministry in 1997 and was ordained at the age of 21 as a youth pastor. After serving vocationally in ministry for 10 years, he felt called to plant a church.

In 2007, Dave and his wife Ashley moved to Carpinteria and began the process of planting with the Reality Family of Churches. It was there God called them to move to San Francisco to start Reality SF. They moved in 2009 and started the church in 2010 after years of prayer meetings.

Dave serves as RSF lead pastor. He and his wife live in Potrero Hill and hope to raise kids in this great city. Dave’s first book, The Truest Thing About You: Identity, Desire, and Why It All Matters was a project that came from his lessons pastoring the first few years at RSF.