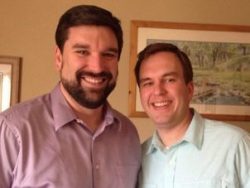 What a fun conversation about sermon prep with the co-hosts of Pulpit Fiction. Pulpit Fiction is a podcast hosted by Rev. Eric Fistler and Rev. Robb McCoy. It is a conversation guided by the Revised Common Lectionary, and includes thoughts about pop culture and current events. It is for preachers looking for inspiration as well as any person of faith willing to think critically about their faith and the Bible.

Robb and Eric met in class at Eden Theological Seminary, got to know each other while playing volleyball on Eden’s church league team, and became friends after the games over pizza, wings, beer, and Police Trainer at Smugala’s.

Robb and Sarah and Eric and Nina spent almost every weekend together while they were in seminary, and are still able to get together every once in awhile. This picture was taken over Thanksgiving weekend, 2013. They share a common passion for justice, mercy, and an abiding love for Jesus. They also a share a love for good scotch, the Bears (we won’t talk about baseball), Anchorman, The Office, and Star Wars.