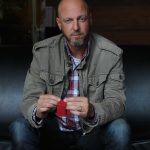 Tim Suttle is the senior pastor of Redemption Church in Kansas City. He is the author of several books including Shrink: Faithful Ministry in a Church-Growth Culture (2014 Zondervan), An Evangelical Social Gospel? (2011 Cascade Books), and Public Jesus (2012 The House). His blog is called Paperback Theology, which can be found at Patheos.com. Tim often writes for The Huffington Post and his work has appeared in Sojourner’s, On Faith, and many other magazines and journals. Tim was the front-man of the Christian band Satellite Soul, with whom he toured for nearly a decade. Tim has planted three churches over the past 12 years and is the Senior Pastor of Redemption Church in Olathe, Kan.

Links mentioned:
Bible Gateway
Textweek.com
Radiolab
Story Corps
Here’s the Thing, with Alec Baldwin
You Made it Weird, with Pete Holmes
Serial
On Being
The Moth