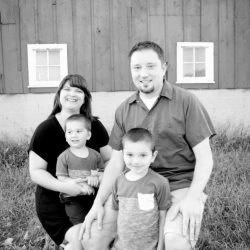 Dustin Bagby has been a pastor in The Evergreen Community in Portland, OR for the last 8 years. Previously he helped to plant a church in NYC where he also performed stand-up comedy at many of New York’s great comedy clubs. He is passionate about beer brewing and serves on the board of directors for Ex Novo Brewing Company; the first non-profit brewery in the country. He’s been married to Kelli for almost 10 years and has two sons; Gram (5) and Owen (3). He’s also a miserable Cubs and Bears fan.

This’s weeks partner: Audible, with a recommendation of the audiobook version of Gilead, by Marilynne Robinson